Dell OS10 is Dell’s latest switch operating system. It is built on a Linux core and is Dell’s offering in the Open Networking space. It is NOT intended as an upgrade for switches running OS6 (N-Series) or OS9 (legacy S-Series), however, any Dell S- or Z-Series switch with a “-ON” in the name can run OS10. OS10 is licensed separately from the hardware because it can theoretically be run on any switch that supports the Open Network Install Environment (ONIE). As I am writing this, the current stable version of OS10 is v10.5.1.1, and it is available on a majority of Dell Datacenter switches including the 1G S3048-ON, the 10G S41xxx-ON line, the 25G and 100G S52xxF-ON line, and the 100G and 400G Z9xxxF-ON.

In this series of posts about OS10 switches, I hope to give you some knowledge about how OS10 works, and how to configure some of the basic functions within OS10. Feel free to contact us if you have further questions about OS10 switches and networking, or if you would like assistance with configuring your OS10 switches.

NOTE: This series will discuss OS10 Enterprise Edition which is licensed. There is also a no-cost Open Edition, which is just as powerful, but much more complicated to manage as it removes the switch-like command interface and requires you do everything with native Linux networking commands. For our purposes, OS10 refers to the Enterprise Edition, unless explicitly stated otherwise.

When you need to connect switches and other network devices together, the easiest method is to connect them with a single cable. This works, but it lacks any redundancy, and it is limited to the bandwidth of that single connection.

The best way around these limitations is with Link aggregation.

One caveat regarding LAGs regarding bandwidth. You may sometimes encounter a heated debate between network admins about whether LAGs increase bandwidth. The reality is they are both right, and they are both wrong. It depends.  A LAG can improve bandwidth, but that does not mean it will do so on any given application. Many protocols, once they establish a connection, continue to utilize the same path for all the frames or packets related to the session. This would limit any single connection to the bandwidth of a single cable – i.e. the LAG does not increase bandwidth. However, not all protocols have this limitation (although many of the common ones we used do), and the LAG will distribute each connection (even stateful ones) across the different links, so in aggregate, you will be utilizing more bandwidth than a single connection – i.e. the LAG does increase bandwidth. It is a matter of perspective. Never-the-less if you are hoping for four cables to 4x your bandwidth you will be disappointed.

Vendors use all sorts of names for these types of connections. The primary reason for this is because the IEEE was slow to authorize a standard, so they all developed their own proprietary versions. Most vendors have since dropped their proprietary versions in favor of the standard, but most retained the proprietary names. Dell, for instance, calls them port-channels in OS10.

Whew! Now that we have a shared understanding of LAGs, let’s dive into how you would implement an LACP LAG on an OS10 switch.

The most common way LAGs are used is to connect two network devices, usually switches. That is what we will assume we are doing for this example. Really any two devices with multiple nics that support LACP can be configured to use a LAG to connect with an OS10 switch.

To start, enter config mode. Then type the following command to create a port-channel:

Then you would configure the port-channel like any other port – VLANs, description, etc.

channel-group X mode XYZ
# X is the port-channel ID, and XYZ is the mode – for LACP generally, you would use ‘active’, but you could also use ‘passive’ for compatibility with other vendors 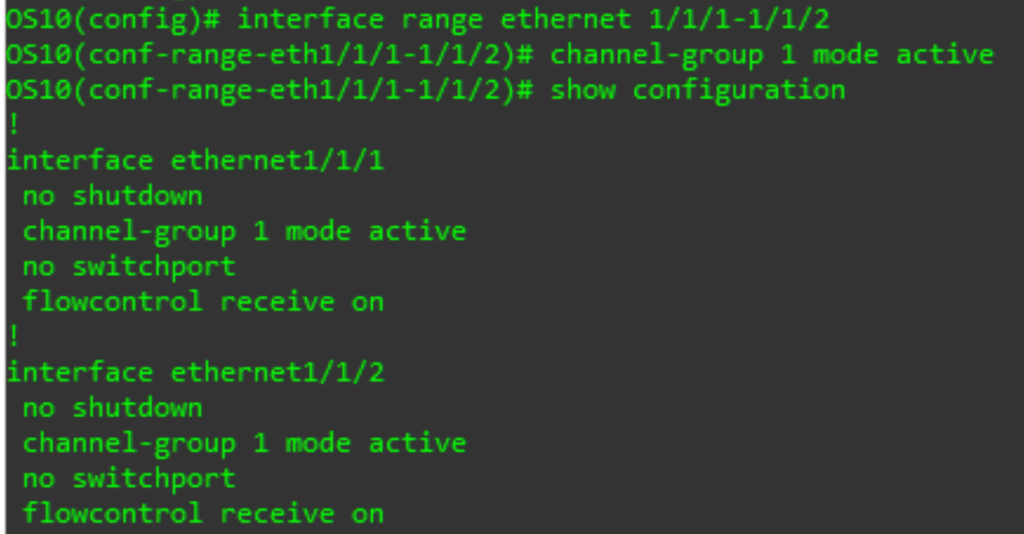 Once one side is completed as above, we need to repeat it on the other side. After both sides are configured you can connect the cables.

After they are connected, we can confirm that the port-channel is working with the following command.

Now the connection between your switches is more resilient because of the added redundancy and has the potential to provide additional bandwidth.

To remove a port from a port-channel, enter that port’s config and use the no form of the channel-group command. 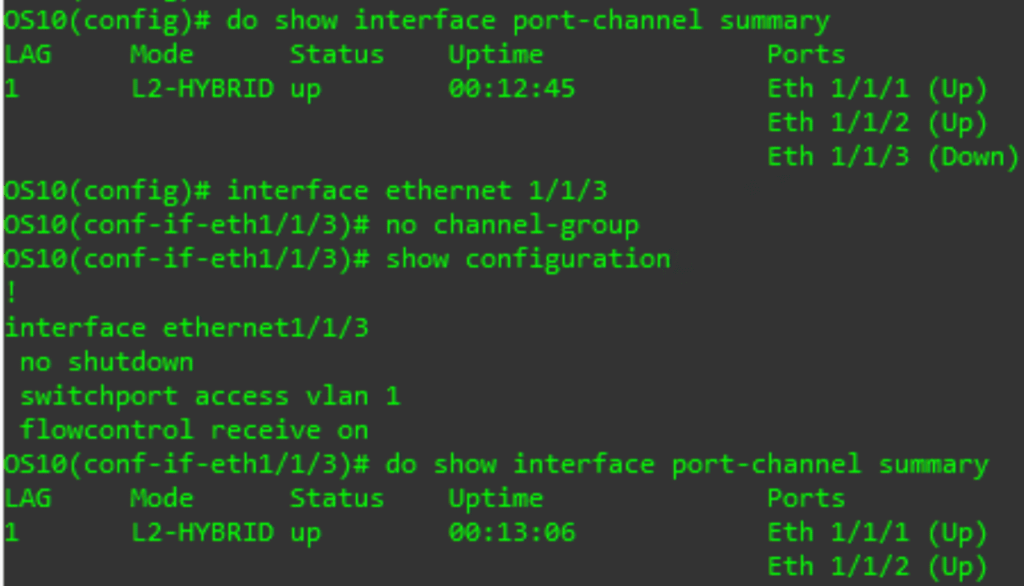 To remove the port-channel entirely, use the no form of the interface command in config mode:

Now you know how to properly configure a LAG between Dell OS10 switches increased reliability and performance, and you know a little more about how LAGs for in general.

About the Author: Daniel Johnson

Have you tried to license a new Nutanix Cluster and received an incompatible error message during the Nutanix license process? …Read more