Dell just announced PowerStore OS version 2.0. It will be available for download on 6/10/2021.

If you are new to PowerStore, check out this intro post here. As you can see, the platform launched a year ago was a little lean from a feature set perspective. Dell is rapidly filling out those capabilities and is doing so in a very forward-looking way. PowerStore, particularly with version 2, is thinking ahead and has several capabilities that many customers aren’t sure they need… yet. Let’s walk through some of the major new features in PowerStore OS version 2.

Dell is claiming a 25% boost in overall performance with significantly improved write performance. The claim is using a 70/30 read/write ratio with a small 8k block. This is a nice feature for existing customers. If you have a PowerStore today, it gets roughly 25% faster just by installing this latest software update.

This is another one of those future-ready improvements that customers may not be asking for yet but will position PowerStore for the future.

As a reminder, this is the feature unique to the “X” variant models that allow virtual machines to run on the storage array, can now scale-out.

Note that this item applies to all models EXCEPT the new PowerStore 500 described here.

Dell calls this feature “Drive Failure Tolerance” and on an appliance-wide basis, you can now select either single or dual redundancy. This means that the system can tolerate the loss of one drive or two. This would be roughly analogous to RAID 5 vs RAID 6. A couple of important points:

* If you buy a system with 7 drives, and then grow to 19 drives over time, you end up with the equivalent of 1 spare, 12 data drives, and 6 parity drives for the overall efficiency of 63%.

* If you buy the system with 19 drives in the first place, the system would stripe at up to 16+2, resulting in 1 spare, 16 data drives, and 2 parity drives for the overall efficiency of 84%.

* Sure, the system supports starting small and adding one drive at a time, but as you can see, this results in a less efficient system and a much higher $/GB. 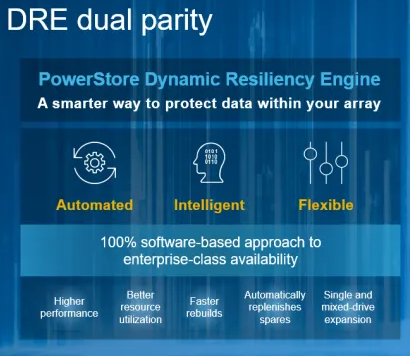 There have been some improvements to data reduction that result in better performance and dedupe ratios. Here is the short version:

The PowerStore has supported both NVMe SSDs and NVMe SCMs since launch. It has not, however, supported mixing those drive types. PowerStore OS 2 adds the ability to include some SCMs in an SSD build for a fairly specific use case. This isn’t about tiering. What the system now has the ability to do is use a couple of SCM drives for metadata. Larger systems in particular may see an increase in overall performance by including a couple of SCM drives in the build for faster access to metadata.

Along with this new code release, there is a new hardware model that will start shipping at the same time. This new model, the PowerStore 500, is available for ordering on 5/4/2021 and will start shipping on 06/10/2021. Here is all the information you need to know about the new gear.

This review touched on just a few of the updates in PowerStore 2.0 and beyond. Overall the update brings a number of new features that definitely add value to the platform. There are some usability improvements and some real architecture improvements that will benefit businesses that use the platform.

Here is the PowerStore spec sheet, with lots of useful information around limits and models.

Here is an article from StorageReview.com

About the Author: Rick Gouin

Professional Services:  An Ode and “Thanks” to Our Engineers

It’s hard to believe that I’ve been consulting and leading professional services teams for over 10 years now.  While I’ve …Read more