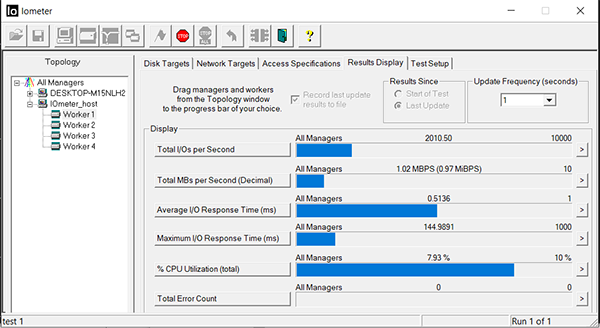 This was a fun little project and something I just couldn’t let go of. Like most of you reading this blog I’m a fan of computer science and one of the things I like most about it is the instant gratification of making something work in my lab or in the field.  The science part comes in when you don’t know quite how to do something, so you start changing variables one at a time and documenting the results. This post is in part an introduction to Linux, but also a description of a project I completed for a client who wanted to simulate load on their newly installed Linux server environment. They had been burned before and needed baseline comparative performance metrics to prove the WTG-provided solution was going to meet expectations.

If you have landed on this page because you just want to test i/o on Linux here are a couple of links to help you do just that, using stress and iotop are tests you can run in minutes.

Why do this at all?
The real genesis of this project was a customer request and having used Iometer in the past I decided that was the load and reporting tool I wanted to leverage.   I also needed something that could run on many flavors of Linux, Ubuntu, CentOS, Redhat, etc.   What I quickly found out is that you can’t run Iometer directly on your Linux host.  Iometer is two tools, a load generation engine called Dynamo and the management interface that we know as Iometer.  Dynamo can run on almost anything while the Iometer graphical interface will only run on Windows. After a quick search, I found several links to help me set up Iometer on my Windows desktop and deploy Dynamo on my Linux server.  The links helped but like any good project it wasn’t just following directions, there were little challenges along the way, and I learned a few helpful Linux commands I wish I had known all along. Without further preamble here is the process for load testing on Linux with Dynamo and leveraging the Iometer GUI to set load parameters and collect results.
This is also a great little lab to interconnect your Windows desktop with your Linux server environment.
I need a Linux boot disk (for those of you that need to build a simple Linux Server/Desktop)
Installing Iometer on Windows (logon to your windows desktop and install Iometer)

Logon to your Linux server and install Dynamo
Installing Dynamo can be a little bit of a challenge if you’re not working in Linux often, I’ve tried to supply some guidance and some troubleshooting tips.

How to locate and install the missing packages

If you have successfully installed Dynamo and got it running, you should get this output (see image):  the I/O engine has successfully been installed, notice the workers are idle, and not generating I/O.

Congratulations all the hard work is done! 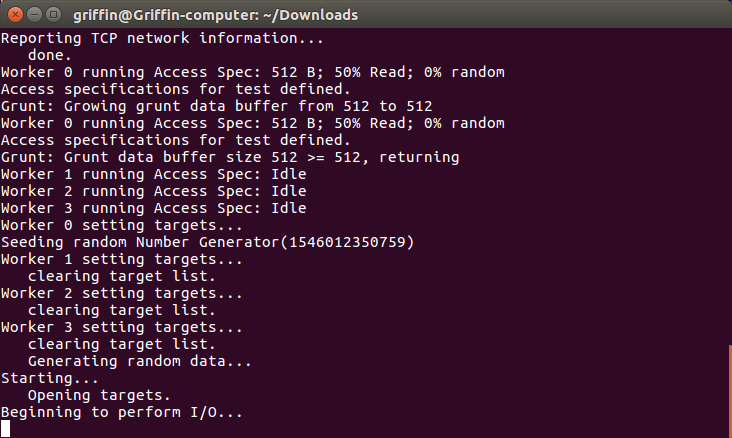 Validate your Iometer station can see your Linux host

Go back to the Windows system with Iometer and verify that the new manager was created.

You should see a new device under managers with 4 workers associated with it.

Before we start the load testing

Before we dive into the load testing, we should do a little prework and make sure we can see what’s happening and that we are testing the right disk resource.

If you want to test a specific device use lsblk on your Linux server to list the partitions.  You can tell the disk of interest by the size and consumed capacity.

Here is what iotop looks like while not running a load test. Notice the disk reads and write bytes are at zero.

Running Iometer and testing different load scenarios is a deep subject if you landed here I’m assuming you’re familiar with Iometer (just in case here’s a link to some documentation and user guide).

For the sake of this project, I’ll assume you can figure out how to start a quick test using Iometer with a few hints.

As mentioned earlier you want to select your partition of interest and define access specifications.

Access specifications are the workload profile for example 50% reads 50% writes with a 4KB block size.  Once you’ve selected a worked and a profile you just hit the green flag and away you go.  You can see the workload being generated by going to the display results tab in the Iometer GUI. (see image below)

The above image details that I’m generating 2010.5 iops per second with an average response time of .5136 ms so about half a second, which is a good response time for my legacy hardware.

Often you are using Iometer to:

Iometer will save all data by default as a CSV file.

You should also see the workload locally on your Linux server via the iotop command (see below), notice the reads and write are now being exercised at 1311 KB/s and 1273 KB/S respectively.

You might be wondering why the Iometer GUI is reporting 2010.5 iops and iotop running on my Linux server is showing almost no disk I/o.

The answer is I took this image very quickly after starting my Iometer test resulting in all the i/o being serviced via cache.

The I/O percentage would have changed over time. 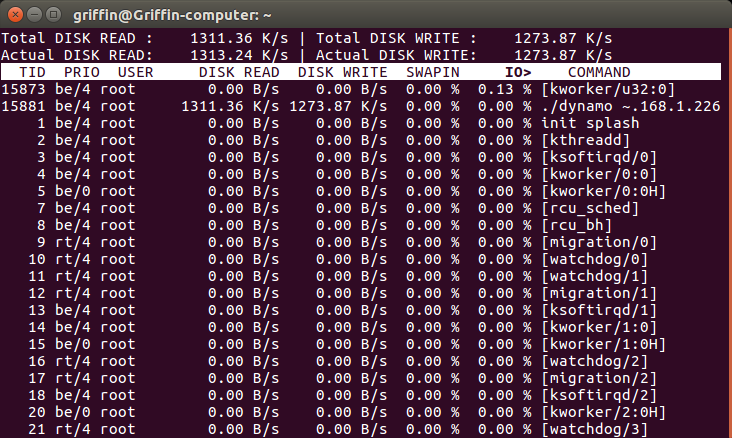 I hope you’ve enjoyed this tutorial and if you were using this as a fun project to learn some Linux, I applaud you.

If you don’t have a Linux host but want to try this anyway I’ve included a section about how to build a Linux bootable thumb drive.

It’s super easy to make your own bootable thumb drive and you’ll have a nice little Linux machine to mess around with..

If you haven’t used Iometer it’s a good idea to visit their site and look around.   (www.iometer.org).

How to build a bootable Ubuntu thumb drive:

About the Author: Greg Swain

It’s always the small pieces that make the big picture