BAC was interested in replacing their traditional 3-2-1 server, networking, and storage stack, which was not originally designed for virtualization. Winslow Technology Group partnered with BAC to explore a hyperconverged solution to replace the existing infrastructure. 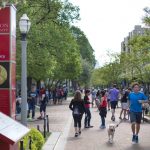 When the Arts and Sciences department at Boston University (BU) needed a simple way for students to use the computer labs, they confidently chose Winslow Technology Group (WTG) as their IT solutions provider.

Cianbro’s networking infrastructure was aging and in need of optimization. Winslow Technology Group and Dell Technologies collaborated on a joint, all-encompassing networking solution for Cianbro.

Creare had many dedicated servers and were looking to consolidate onto one platform to keep their system confined. Creare chose to work with Winslow due to our deep expertise with Dell EMC’s SC Series and our ability to deploy and install this project remotely.